Lake Como’s primary inflow are the rivers Adda and Mera, and the River Adda also serves as the lakes primary outflow. 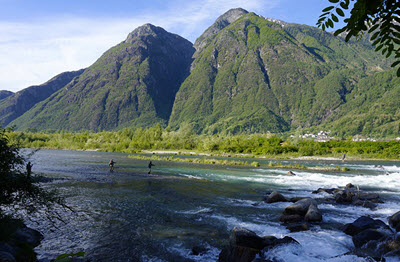 The River Mera has its source in the Swiss mountains and ends in Lake Como in Italy. In the Lombard language, its name is Maira.

Mera starts near the Piz Mungiroi in the Grisons (canton of Graubünden) in eastern Switzerland, at an elevation of approximately 2,500 metres. From there, it flows eastward toward the Maloja Pass, before turning west through the Val Bregaglia (Bergell). It crosses into Italy in Castasegna,

In Italy, Mera is joined by the Acquafraggia near Piuro and eventually also by the river Liro at Prata Comportaccio.

Mera enters Lake Como not far from Sorico in the Province of Como, after flowing a total of 50 km. At the river mouth at Gera Lario, the elevation is less than 200 metres. 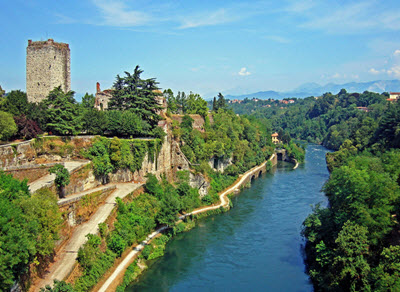 Adda is a river in northern Italy that flows through Lake Como, being both a primary inflow and the primary outflow for the lake. In the Lombard language, the name is spelled Ada.

Adda starts in the alps, near the Swiss border. After flowing in and out of Lake Como, it eventually joins the River Po a few kilometres upstream of Cremona. The total length of the River Adda is 313 km.

Once upon a time, the lower course of the River Adda constituted the border between the Republic of Venice and the Duchy of Milan. This border was established by the Treaty of Lodi in 1454. In this border region, several notable battles have been fought, including the Battle of Lodi in 1796 where the Austrians were defeated by French troupes under Napoleon.

Examples of towns located along the River Adda:

Details about the river’s course

Several lakes near the head of the Fragile glen is the original source of this river. Up there, the river is very small, but it becomes considerably larger later when it is joined by several streams near the town of Bormio in the Raetian Alps. Adda’s main source of water is the Val Alpisella (Stelvio Pass) in Italy.

From the Bormio region, Adda flows southwest and then west, being the only large river in northern Italy that flows from east to west. It runs through Valtellina, passes Tirano, and is joined by the rivers Poschiavino and Mallero.

Adda enters Lake Como at the northern end and exits towards the southeast. It then flows over the plains of Lombardy and is joined by the rivers Brembo and Serio, before emptying into the River Po approximately 13 km above Cremona.

The highest point of the drainage basin is at 4,020 metres. This is the summit of la Spedla, which is a suppeak of Piz Bernina.

Until the introduction of metal in bridge construction, the 72 metre long sandstone bridge arch of the Trezzo sull’Adda bridge was the longest bridge arch in the world. This 9 metre wide single-arch bridge was built in 1370-1377 by order of Bernabò Visconti, lord of Milan. It would take until the early 20th century before masonry bridges with larger openings were constructed.

The bridge was built as an access route to a Visconti castle located above the Adda, and was duly fortified with towers. The rise of the segmental arch was approximately 21 metres, with a span-to-rise ratio of 3.3:1.

During a siege in 1416, the condottiero Carmagnola attacked the bridge and weakened one of its abutments, causing it to collapse. Today, only two abutments with overhangs remains.

About The Rivers Adda and Mera