Lake Como is located within Lombardy, which is one of Italy’s twenty administrative regions. In Italian, the region is named Lombardia, while Lumbardia is the name in the Lombard language.

Lombardy is characterised by three different natural zones: the mountains, the hills and the plains. The plains are further divided into high plains (Alta) and low plains (Bassa).

The largest river in Lombardy is the River Po, which marks the southern border of the region for approximately 210 km. One of its tributaries is the River Adda, which flows through Lake Como on its way to Po.

Lake Como is certainly not the only lake in Lombardy. The northern highlands of Lombardy have a lot of lakes, all of glacial origin, and Lake Como is one of them. From west to east, they are Lake Maggiore, Lake Lugano, Lake Como, Lake Iseo, Lake Idro, and Lake Garda. Lake Garda is the largest of all the Italian lakes.

The name and its origin

Lombardy is home to nine UNESCO World Heritage Sites, some of which also stretches into neighbouring regions.

The fossils of Monte San Giorgio

This pyramid-shaped mountain next to Lake Lugano is one of the best fossil records of marine life from the Triassic Period, i.e. from 245-230 million years ago.

Monte San Giorgio contains the remnants of a tropical near-land lagoon, sheltered and partially separated from the open sea by an offshore reef. In this protected environment, marine life thrived and left behind evidence of fish, crustaceans, reptiles, ammonites, bivalves, echinoderms, and more. Its closeness to terra firma also means that we can find the fossilised remains of land-based organisms here, including plants, reptiles and insects.

Valcamonica has one of the world’s greatest collections of prehistoric petroglyphs. Over 200,000 symbols and figures have been carved into the rock here over a period spanning at least 8,000 years. Several themes are represented, including farming, boating, warfare and magic/religion/spiritual.

Prehistoric Pile Dwellings round the Alps

This UNESCO World Heritage consists of 111 individual prehistoric pile-dwelling (stilt house) settlements scattered in and around the Alps. Some are located in Lombardy and some are found in other parts of the alpine region. The settlements were created from around 5,000 BCE to 500 BCE, spanning both the Neolithic Age and the Bronze Age in Alpine Europe.

The Longobards in Italy, Places of Power

This UNESCO World Heritage consists of seven groups of important Longobard buildings from the period 568-774 AD. This includes strongholds such as fortresses, but also churches and monasteries. This World Heritage isn’t limited to Lombardy; the buildings are found in various locations on the Italian peninsula. What they all have in common is their connection to the rule of the Lombards and their role in the development of Medieval European Christianity.

This church and convent, located in Milan, sports the famous painting The Last Supper by Leonardo da Vinci on the northern wall of the refectory. The refectory forms an integral part of this architectural complex, commenced in 1463 and reworked towards the end of the century. The Last Supper was painted between 1495 and 1497. 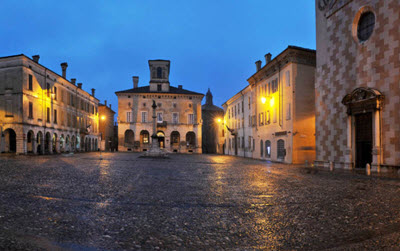 These two towns, both located within the River Po valley, represent two aspects of Renaissance town planning. Mantua is an excellent example of how an existing city would be renewed and extended during the Renaissance, while Sabbioneta showcase Renaissance theories about the ideal city planning.

Sabbioneta, with its strict right angle grid layout, was created during the second half of the 1500s and the outlay of this city was strictly under the control of one leader: Vespasiano Gonzaga Colonna.

The powerful Gonzaga family had a hand in the development of Mantua too, but here they didn’t start from scratch since Mantua was already a bustling town as early as the Roman Empire period. The city layout is a combination of regular Renaissance parts and irregular older neighbourhoods. Many Medieval aspects have survived into our time, including a rotunda from the 11th century.

One of these fortifications is the Fortified City of Bergamo, which is situated roughly 30 km from Lake Como and Lake Iseo. Data from the year 2015 shows that this was the second-most visited city in Lombardy that year (after Milan).

The nine Sacri Monti of Piedmont and Lombardy

This UNESCO World Heritage is comprised of chapels and other Christian buildings created in northern Italy in the 16th and 17th centuries. Many of them are not just architectural and artistic feats in themselves; they also house noteworthy art in the form of statues, paintings and more.

On a hillside slope on the western edge of Lake Como you will find Sacro Monte di Ossuccio, a sanctuary where fifteen chapels were built between 1635 and 1710. The chapels are dedicated to the Mysteries of the Rosary and dotted along a road leading to a monastery dedicated to the Coronation of the Virgin.

Located in Capriate San Gervasio in Lombardy, Crespi d’Adda is an excellent example of the company towns created in Europe and North America during the 1800s and early 1900s. Crespi d’Adda showcase ideals upheld by industrialists who wanted to create improved living conditions and quality of life for factory workers. Crespi d’Adda was founded in 1878 to provide housing for textile mill workers. At its peak, the town was home to 3,200 employees and their families.

Almost a century and a half later, Crespi d’Adda is surprisingly unaltered, but new economic and social conditions are threatening its continued survivial.

The Rhaetian Railway in the Albula / Bernina Landscapes

The Rhaetian Railway in the Albula / Bernina Landscapes brings together two historic railway lines that cross the Swiss Alps through two mountain passes.

The Albula line and Berenina line are both astonishing examples of how the ingenuity of early 20th century railway engineers was able to finally overcome the isolation of the many small settlements of the Central Alps. Today, it is almost difficult for us to fathom the huge social, cultural and economic impact the railway had on these previously so sequestered mountain communities.

The 67 km long Albula line, which opened in 1904, was made possible thanks to the construction of no less than 144 viaducts and bridges + 42 tunnels and covered galleries.

With its 61 km, the Bernina line is just a tad shorter, with 52 viaducts and bridges and 13 tunnels and galleries.