Colico serves as a transport hub for the local area, with boat traffic to both Como and Lecco. You can also catch the train to Milan and onward. 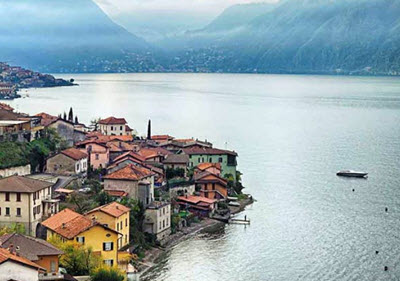 The two legs of the Colico economy are tourism and industry, and there is also a large presence of banks. Among other things, the industry here produces yachts and construction trucks.

Colico’s city centre is traditionally defined as the area bordered by Piazza Garibaldi, Via Vitali, Largo San Giorgio and Via Pontile. This discrict has a long beach and schools for sailing, surfing and kite flying. There are also tennis courts, a soccer field and a library located within this district.

From a tourist perspective, Colico distinguishes itself by having a large number of campsites. They are a great alternative to the hotels in the Lake Como area (which can be rather expensive) and will also allow you to enjoy the wonderful Lake Como nature 24/7.

The natural surrounding around Colico are very pretty, with the scenary dominated by the 2,609 metre tall Monte Legnone. There are two main waterways, Inganna and Perlino, and the River Adda forms a natural boundary to the province of Como.

As migratory birds move south from Northern Europe or the Alps by the end of the summer, many of them pass through Colico and some of them make a stop to rest here before they continue. In spring, they return again on their way north.

The Italian stage of the World Cup of Kitesurfing takes place in Colico.

Musica sull’Acqua (Water Music) is classical music festival that takes place in Colico. It is held in the Piazza Garibaldi and at the Abbey of Piona.

Sightseeing in and around Colico

Forte di Fuentes (Fort Fuentes) is 17th century military fort situated on the hill Montecchio near the city of Colico. This creation of this fort was ordered by the Count of Fuentes, Spanish governor of Milan. Construction commenced in the early 1600s and was complete within three years. 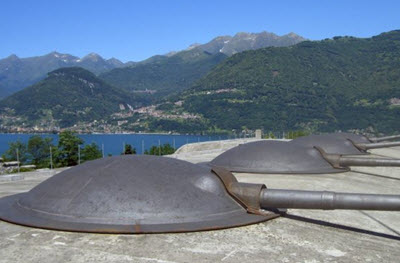 The guard towers of Montecchio

The Colico area was already fortifed during the Medieval era, long before the creation of Fort Fuentes. On the hill Montecchio you can still see two remaining guard towers which were once a part of the medieval Castle Colico.

One of the towers is the Fontanedo Tower, which was once a part of a complex fortification work built by Visconti in the 1300s. This tower helped control the upper parts of Lake Como, as well as Lake Mezzola and the Colico hinterland.

The other tower, now known as the Curico Tower, was used to control the ancient road between Lake Como and Valtellina. Today, the remains of this tower is a farm house.

Piona Abbey on the Olgiasca peninsula is home to a Romanesque church built in the 11th century.

The church of San Rocco, originally dedicated to the Saints Fabian and Sebastian, is situated on the slopes of Monte Legnone outside the city of Colico at an elevation of 500 metres. Traces of early 15th century paintings have been discovered here.