Lake Como is a lake of glacial origin in northern Italy, not far from the Swiss border, in the Lombardy region. In Italian, its name Lago di Como, but it is also known as Larío which is the Italianised version of its Latin name Larius. To avoid confusion with the city Como, the lake is normally not referred to simply as Como – you say Lake Como, Lago di Como or Larío.

Lake Como and its surroundings has been an illustrious retreat spot for the members of rich and influential families since the Roman times, and continue to be so today. Back in the days, Pliny the Younger built the resorts Comedia and Tragedia here. Today, the lake is surrounded by large and beautiful villas with interesting histories.

You don’t have to own a villa to vacation by Lake Como since there are plenty of hotels to chose among. Still, Lake Como has retained its air of exclusivity and it is certainly not the most affordable part of Italy to visit.

As a tourist destination, Lake Como certainly has a lot of things going for it. The landscape is exquisite and the lake is great for boating, sailing and kite-surfing. From the surrounding farms, you can purchase locally produced cheese, honey, olive oils, eggs, salami, fruits, vegetables, and more. Many of the farms have their own little shops at the farmstead.

Some of the lakeside villas have been partly turned into museums open to the public. One example is Villa Charlotta, which contains a museum of agricultural implements and several important works of sculpture. This villa was built for the Milanese Marquis Giorgio Clerici in 1690 on 17 acres of land facing the Bellagio peninsula.

Another Lake Como villa well worth visiting is Villa del Balbianello, built in 1787 on the site of a Franciscan monastery. This was the final home of the explorer Guido Monzino and is today housing a museum devoted to his work. Villa del Balbianello is situated on a promontory of the western shore of Lake Como.

A lot of famous people have Villas on lake Como. Some prominent examples of this includes: 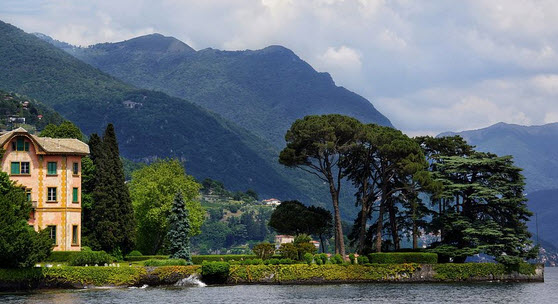 Towns, villages and other points of interest around Lake Como

The Lake Como region enjoys a humid subtropical climate, but the winters can nevertheless be chilly, even though the presence of the big lake helps keep the temperatures higher than what they would be without the lake. Some of the sheltered gardens belonging to the large villas around the lake actually have tropical plants thriving in them, thanks to the stabilising effect of the lake.

The rainiest month is May.

It sometimes snows in the region, but chiefly at higher elevations than the lake itself.

The public transit system on the lake

If you want to visit the many small towns scattered along Lake Como’s shores, the public transit system on the lake is a great way of doing it.

There are three main types of services: